In the 1960s, the majority of the bikes in the Japanese motorcycle market were small-displacement machines in the 125cc class. Comparatively, the huge displacement and abundant power of the 4-stroke 624 cm3 W1 made it stand head and shoulders above the crowd, and become an object of longing for Japanese riders. For Kawasaki, the W1 meant recognition on the world stage as a big-bike manufacturer. It also marked the start of the Kawasaki’s Quest for Speed, a passion that led to the development of numerous legendary models.

It was an era when all but a few Japanese motorcycles were small-displacement machines. Kawasaki was one of the first to introduce a big bike, powered by a 496 cm3 OHV Parallel Twin, the world standard of the time. The engine’s roots could be found in the Twin engine of the same displacement produced by Meguro Manufacturing Co. Motorcycle Works, a well-known bike manufacturer established in 1927. Kawasaki absorbed Meguro in the 1960s, inheriting the motorcycle technology they had been developing since before World War II. The 1965 K2 was based on the Meguro’s K Series models and redesigned by Kawasaki Aircraft Co. Ltd. to increase its durability and top-speed performance. A prototype model based on the K2 evolved into the W1 released the following year.

Of all the export markets, America was of particular importance. Kawasaki had already broken into the US market with its 125B8, but to tackle America’s big-bike market they began to prepare a larger-displacement version of the K2. The 496 cm3 engine’s bore was increased by 8 mm, bringing displacement to 624 cm3. A prototype model with the larger displacement was displayed at the 12th Tokyo Motor Show in 1965. Meanwhile in Kawasaki’s Akashi Factory, mass production of the new W1 was already underway, with new units rolled off the line and arranged neatly, ready for sale. Compared to the K2’s 165 km/h top speed, the W1 could exceed 180 km/h, and in the 0-400m, it recorded a time of 13.8s. Selected with the American market in mind, the fuel tank – often considered the centrepiece of a motorcycle – was coloured a brilliant candy red and complemented by high-quality chrome pieces. The novel design was a bold statement, in stark contrast to the subdued tones of other Japanese motorcycles. It was unveiled to great acclaim at events all across America in February 1966, with orders pouring in before sales even began. With the W1, Kawasaki gained worldwide recognition as a big-bike manufacturer.

To meet the wide needs of the North American market, Kawasaki developed two variation models. The W1SS featured racing flag-themed chequered decals on its side covers, short mufflers that delivered a loud popping exhaust note, and short, sporty fenders. To that, the W2SS added twin carburettors and larger, ø38 mm intake valves (increased 2 mm), which brought power from 47 PS at 6,500 min-1 to 53 PS at 7,000 min-1.

The W1 Special (or W1S) was a Japanese-market version of the W2SS. It too featured twin carburettors, and offered the same 53 PS output as the W2SS. While W1 instrumentation combined the speedometer and tachometer into a single housing unit, the W1S separated them. Interestingly, until the initial W1S model, the W models featured taiko-style turn signals (each with dual lenses facing both forward and aft like the Japanese drums after which they were named) mounted on long stays. The US regulation-compatible turn signals and a full-scale speedometer indicating 220 km/h, concessions for the global market, were ideal features for Japan’s blossoming Highway Age.

The W2TT was a scrambler model complete with high-position mufflers. The chrome-accented fuel tank was replaced with an all-paint tank in later years, a change that marked a turning point in the tank design of future models. Capitalising on the big-bike boom initiated by the W Series, Kawasaki introduced the 489 cm3 2-stroke Triple H1 (Mach-III) the same year. Its fuel tank had a two-tone design like the W models, adding to a conspicuous design that made it stand out even among other large-displacement machines.

Praised for
Its Rich Character
650-W1SA

In the late 60s, the H1/H2 (Mach) Series was enjoying success in the North American market. When the Z1 (900 Super Four) was released in 1972, it was an explosive hit. The Kawasaki name was becoming synonymous with big bikes. Meanwhile the popularity of the Vertical Twin-powered W Series was firmly rooted in the Japanese market. The W1SA, which swapped English-style controls (right-foot gear shift lever, left-foot brake pedal) for a German-style arrangement (left-foot gear shift), was well received. The W Series was top of mind when it came to big bikes with a rich character.

The 1973 650RS (W3) was the first Kawasaki to feature dual front disc brakes. When the Z2 (750RS), a downsized version of the Z1 (900 Super Four), was released for the Japanese market, it launched a 750 boom. But the characteristic engine feeling offered by W Series models ensured that their popularity continued, especially among Japanese fans of traditional models. Production of the 650RS ended in 1974, but when it became known that sales were going to end, new model prices received a premium mark-up – an extremely rare phenomenon for the time.

Return of the Meguro
Estrella

The design of the 1992 Estrella was greatly influenced by a predecessor of the W Series, Meguro’s hit model, the 250 Meguro SG. The Estrella’s arrival was praised as a return of classical styling. Its engine offered the beat that one would expect from a “true” motorcycle, strong low-mid range performance, and an exhaust note that could be enjoyed at a relaxed pace – all appealing properties reminiscent of the W Series. With their common DNA, they could be said to be related. Trading its characteristic dual saddles for a more orthodox double-seat, the Estrella is currently available as the W250, a popular addition to the W Series.

Returning after a quarter-century absence, the new W model was powered by an all-new air-cooled Vertical Twin engine. A 360º crankshaft offered a unique pulse, adding to its rich character. Although it had a 675 cm3 displacement, the new model was named W650 – a link between the old series and new W era that was starting. The cam chain tunnel of the early W models was replaced by a more intricate and costly bevel-gear cam drive and a SOHC 8-valve head, a design that resulted in a simple, elegant design for the cylinder head area. Matching bodywork worthy of the W name, the engine itself was a piece of art. With a production run that spanned a decade, it brought joy to a wide range of riders until the 2009 limited-run final-edition.

Catering to
a Wider Fan Base
W400

The W400 was released in 2006 to accommodate the Japanese licensing system. To make it user-friendly for new riders, it featured a low seat height. In a distinct departure from absolute speed and power, the rider-friendly chassis design proved popular and welcomed a whole new range of riders to the W world.

The W800, a successor to the W650, arrived. With a bore and stroke of 72 x 83 mm (bore was 5 mm greater), displacement increased from 675 cm3 to 773 cm3. Like the W650, it featured timeless good looks and twin peashooter mufflers that delivered the sonorous exhaust note one would expect from a Twin engine. Traditional dual-dial instrumentation, chromed steel fenders, and a buffed finish or clear coat finish on numerous parts were among the many W Series details that it inherited. A final-edition model was released in 2016, marking the end of production.

Expanding the Reach
of the W Brand
W175

The littlest brother in the W Series took Indonesia by storm. Its torquey air-cooled SOHC Single engine delivered an output of 13 PS at 7,500 min-1. With a double-cradle frame, tuck & roll seat and a classic peashooter-style muffler similar in design to that of the W800, the W roots are easy to see. Opting for a Mikuni VM24 carburettor instead of fuel injection was market concession that would make adjustment easier for local riders. 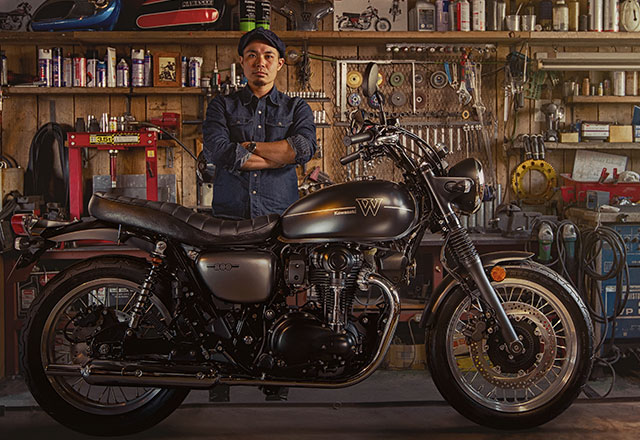 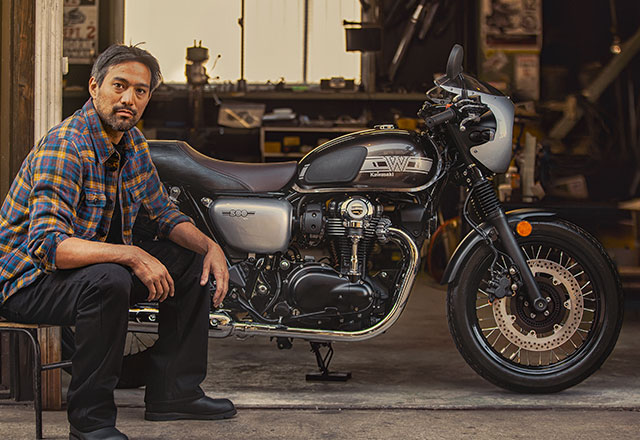